Lim Festival takes place in Tien Du district, Bac Ninh province, around 20km from the Hanoi capital. This is one of the unique and most famous in Northern Vietnam. The event holds significant meaning to the culture of the locals here. Follow us to discover interesting facts about this special festival.

1. The Origin of Lim Festival

There are many legends about the origin of the Lim festival until now.  Some believe the event was held as a homage to the old love story of Truong Chi - My Nuong.  Others say that the Lim festival originally aimed to worship Ba Mu - a child of Noi Due hamlet, who protected all residents in the village against a severe drought.
However, according to the villagers, the origin was traced back to the 18th century when Nguyen Dinh Dien - a mandarin born in Noi Due village - donated a large amount of money to restore temples, hold festivals and preserve traditional customs in the region.
When he died, the locals decided to organize two annual ceremonies on his date of birth and death at Hong Van Pagoda on Lim mountain. At present, only one ceremony is held on the 13th of the first lunar month of the year. Hence the Lim Festival takes place at the same time.
Lim Festival also aims to worship Mr. Hieu Trung Hau, who invented Quan Ho singing - a highlight of the festival. 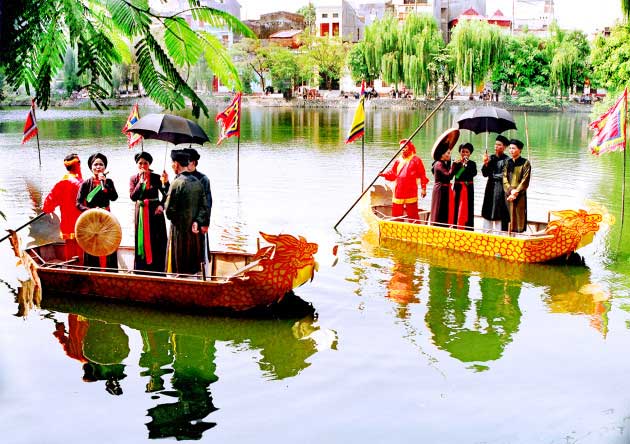 2. Where and When Lim Festival Begins

Lim Festival generally takes place in two or three days, from January 12 to January 14 of the lunar calendar every year.  In the past, the event was held in the King Bac region, which used to consist of Bac Ninh and Bac Giang provinces in the old times.  Lim Festival only takes place in Tien Du district, Bac Ninh province. During this time people often gather on Lim hill and Lim pagoda to join the activities.

3. The Meaning of Lim Festival

The Lim Festival is held to worship Nguyen Dinh Dien in particular and remind the locals of the contributions of their predecessors in general.
Also, the event is aimed to preserve the long-standing traditions of the region. In addition, it holds the cultural and spiritual meaning of the Tonkin people.

4. What To Do In Lim Festival

Like other religious festivals, the Lim festival consists of two parts, including the rituals and the main festival when different activities take place. During the rituals, thousands of locals wearing traditional costumes will march for over one kilometer. Also, the local officials and the elderly in Noi Due village gather at Hong Van Mausoleum to perform rituals of worshiping the local gods.
The highlight of the Lim Festival is Quan Ho singing. Quan Ho is a special folk song of Bac Ninh province, which was recognized as a UNESCO Intangible Cultural Heritage since 2009.
According to some scholars, this special type of folk song could begin in the reign of the Ly dynasty (1009 - 1225) when men and women sang alternate verses to each other.
Quan Ho singing is performed by Lien Anh (male singers) and Lien Chi (female singers), all of whom are just ordinary villagers rather than dedicated artists. Surprisingly, they turn out to be talented artists with beautiful voices that can melt your heart. 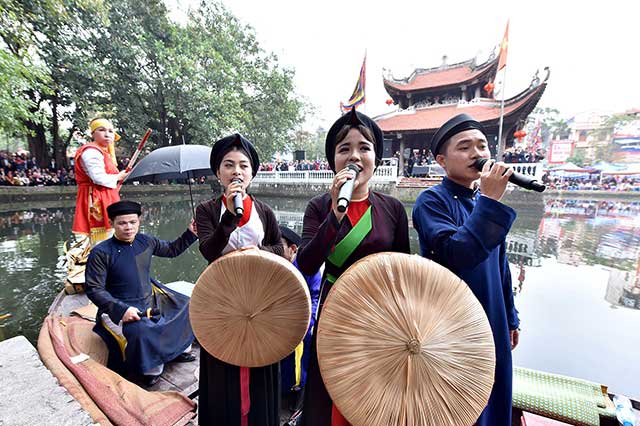 Quan Ho performances are unique as they are more than just singing. They also include hayling ferry, betel offering, and others. The performers dress in colorful costumes: men wearing Ao Dai and holding umbrellas, women putting on four-flapped dresses (Ao Tu Than), and large flat hats (Non Quai Thao). 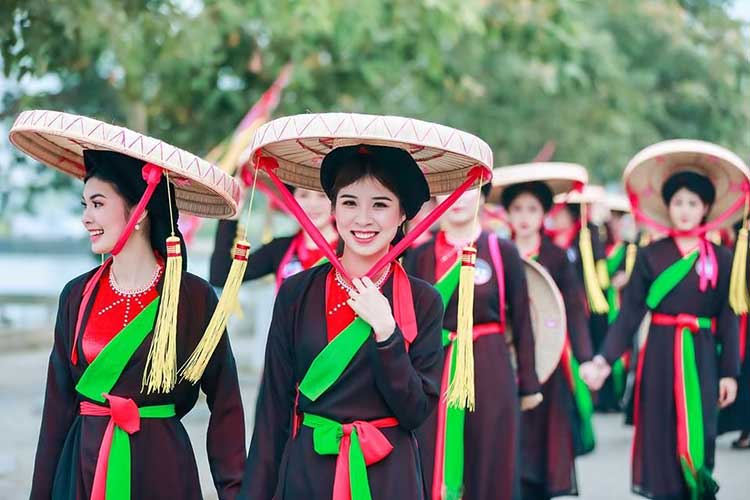 Quan Ho songs have alternate verses, which can be sung in pairs or in groups. They also attract the audience with profound lyrics reflecting from their daily lives to questions and quizzes on various topics.
The folk song performances often begin in the late morning. During lunch, the host singers need to offer their partners food and also songs. In the afternoon, the visiting singers will continue to exchange songs until a tea party takes place at midnight.
The singers keep exchanging songs until dawn when hosts and guests say farewell and express their hope for a reunion in the future, also in the form of songs. Apart from Quan Ho singing, here also involves a myriad of activities, ranging from traditional games, fairs, to contests. Some of the most popular activities include human chess, lion dances, cock-fighting, water puppetry, and more.

The Lim festival may take place in the period of the Tet holiday, so make sure to plan and book your Vietnam tour early to avoid tickets being sold out. Booking two or three months ahead is excellent. If you are staying in Hanoi, there are many ways to come to Bac Ninh to join. You can go by motorbike, bus, coach, or even taxi.
It is highly advised to book a hotel in Noi Due town the night before so that you can attend the festival from the early morning to witness the ritual practices.
But if you are not interested in the rituals, you can start traveling to Bac Ninh from Hanoi in the early morning. Then you will be there on time to watch Quan Ho singing performances. Do not forget to wait until the afternoon to join exciting activities.
Bac Ninh is home to a lot of cultural and religious heritages. It is highly recommended to spend a day there visiting other famous tourist destinations such as Dong Ho painting village, Dinh Bang Temple, Dau Pagoda, Phu Lang Pottery Village, Phat Tich Pagoda, etc.
Lim Festival is a famous event that has deep spiritual meaning to the lives of the locals in Bac Ninh province. Foreign tourists should definitely join the festival to have a rich cultural experience when in Northern Vietnam. Thank you for reading. Go Viet Trip hope this article is helpful for you, If you need any help please feel free to contact us at Goviettrip@gmail.com or hotline +84968667589.

Top 10 unique places must visit in Vietnam in 2022

Cho Hom Market: Best place for Fabric and food in Hanoi in 2022

Vietnam Reopen For Travel | Things Need To Know Before Visit 2022